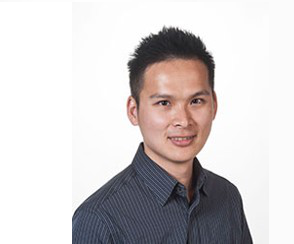 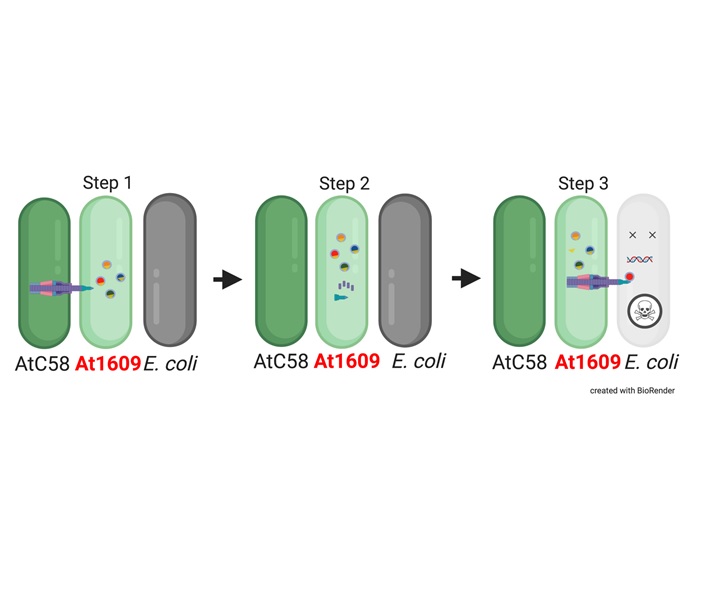 Type VI secretion system (T6SS) is one powerful anti-bacterial and anti-host nanoweapon employed by many Gram-negative bacteria for growth advantages or pathogenesis. A T6SS-harboring bacterium can encode one to multiple VgrG proteins for delivery of cognate effector(s) but the prevalence and biological significance of having sequence redundant vgrG genes have not been comprehensively explored. In this study, the groups of Erh-Min Lai and Chih-Horng Kuo  employed phylogenomic analysis to reveal that the majority of Proteobacterial genomes harbor multiple copies of vgrG but strikingly only a few bacterial genomes have redundant vgrG paralogs. Among them, Agrobacterium tumefaciens 1D1609 has the highest vgrG redundancy. Further study revealed that the expansion of vgrG gene clusters in 1D1609 contributed to effector diversity and functional redundancy. The four vgrGs are functionally redundant in T6SS assembly and 1D1609 uses a nuclease as major antibacterial toxin for interbacterial competition. Importantly, the near identical VgrG proteins between two sibling strains (1D1609 and C58) can be exchanged for effector delivery in killing another competing bacterium such as T6SS-lacking Escherichia coli. This led us to propose that Agrobacterium has developed this flexible mode of T6SS effector delivery - using highly similar VgrGs, either produced endogenously or injected from its close relatives. This flexibility could allow them to be an ally to sister cells and an effective weapon against distantly related bacterial competitors. The knowledge gained from this study has advanced our understanding on the secretion mechanism and strategy evolved in agrobacteria or broadly in many bacterial pathogens to compete within microbial community.

This work is mainly contributed by Nia Santos, a TIGP-MBAS Ph.D. student and published in the journal Frontiers in Microbiology, as part of research topic “Bacterial Secretion Systems”. 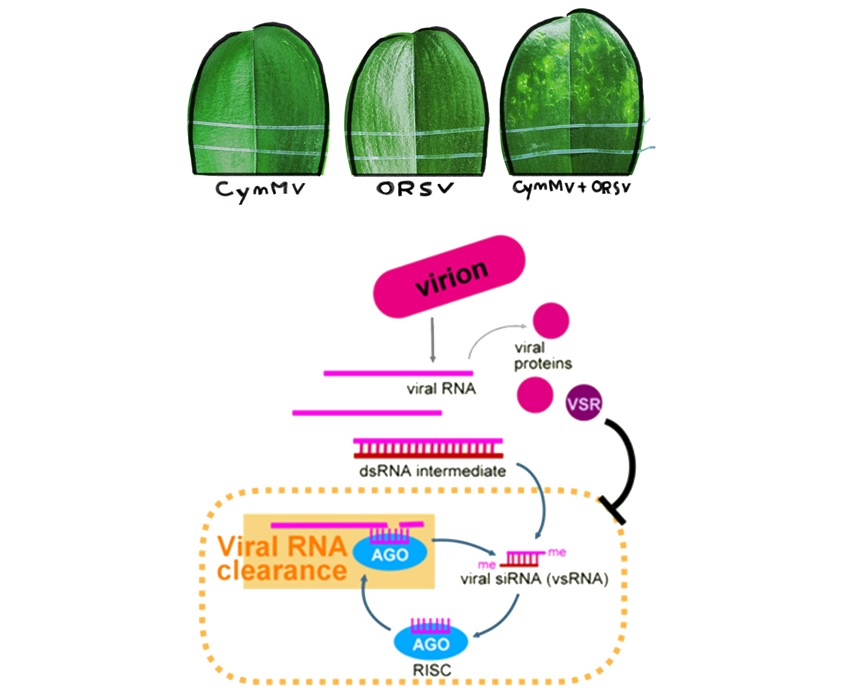 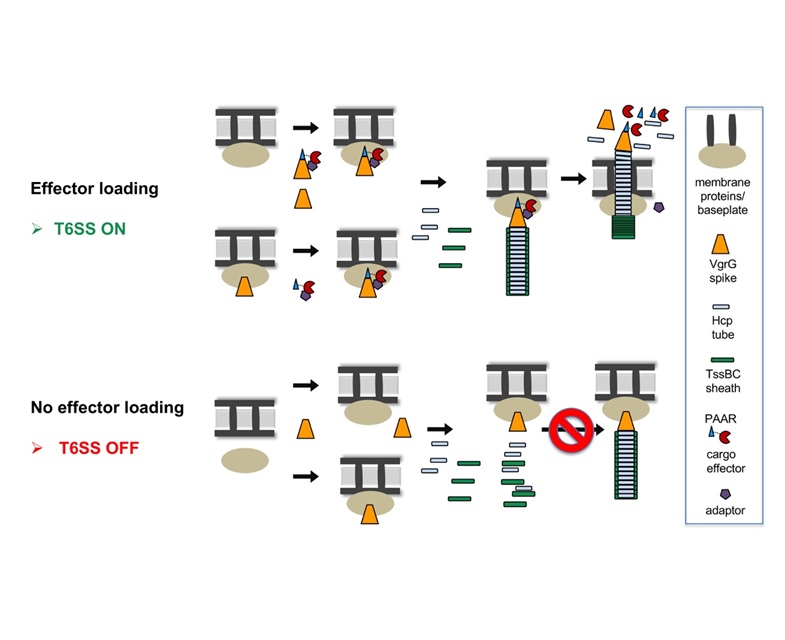 The type VI secretion system (T6SS) is a molecular nanomachine used by many bacteria for pathogenesis or bacterial competition by injecting effectors into the target cells. Because activities associated with T6SS are often costly, T6SS must be tightly regulated. However, our knowledge regarding how T6SS assembly and contraction are regulated remains limited. Using the plant pathogen Agrobacterium tumefaciens, Erh-Min Lai  and colleagues show that effectors are not just passengers but their loading onto the carriers also activate T6SS assembly. They demonstrated a new mechanism that applies across the A. tumefaciens group of bacteria. This is potentially a widespread mechanism, which may be deployed by many T6SS-possessing bacteria as a strategy for efficacious T6SS firing to ensure that effectors are loaded onto T6SS prior to completing its assembly. 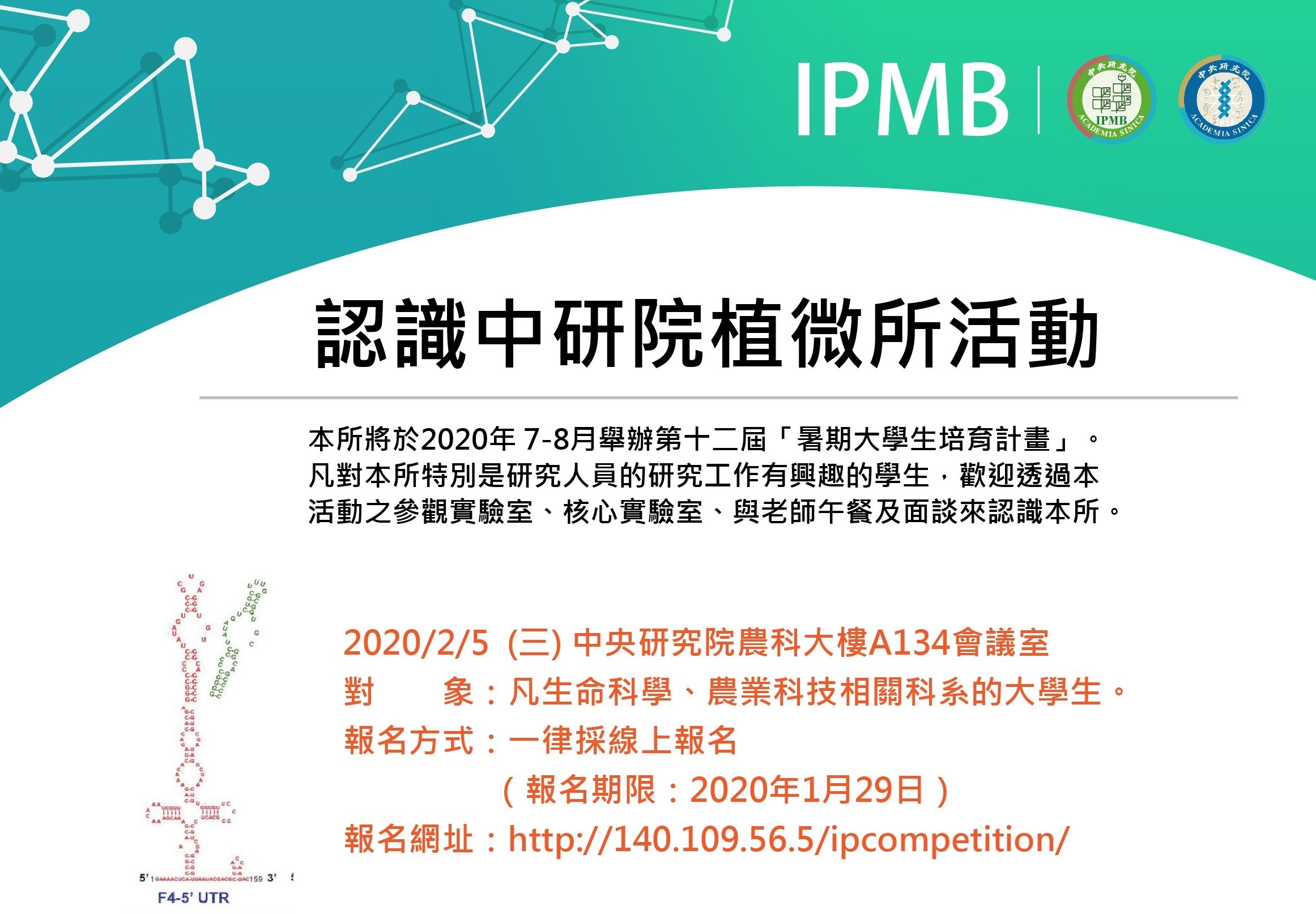 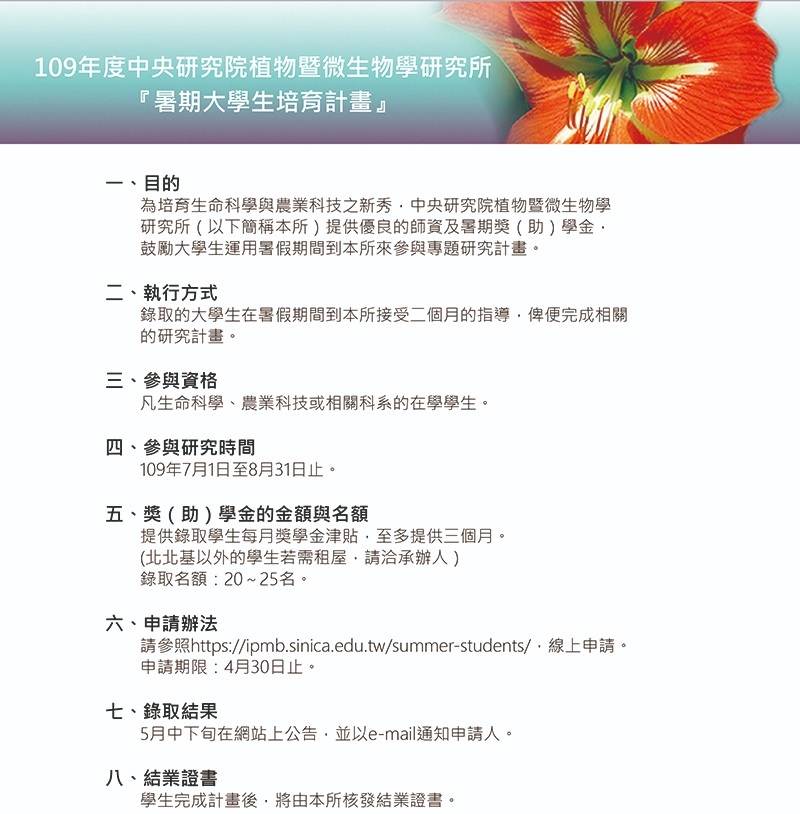 The applications for the 2020 Summer Undergraduate Intern Program are available 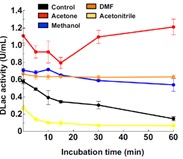 Lignins are common phenolic compounds present in plant cell walls. In pulp and paper industry, it is necessary to remove lignins from cellulose fibers due to their deep color. However, the chemical degradation of lignins heavily relies on chlorides that have severe impacts on our environments. Laccases are copper-containing oxidases that can oxidize and degrade phenolic compounds, providing an eco-friendly alternative for lignin degradation. Our recent research (Wu et al*. 2019) discovered that the activity of fungal laccases were 2 – 3 fold enhanced in the presence of certain organic solvents (e.g. 30% acetone), together with increase in their protein stabilities. The enhancement is reversible and did not affect the crystal structure of laccase protein. The research will be beneficial in improving the lignin processing efficiency of laccases and decrease the cost of its use in industry. 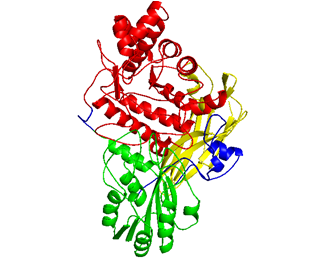 To produce second-generation biofuels and other valuables chemical compounds, enzymatic catalysis is required to convert cellulose from lignocellulosic biomass into fermentable sugars. b-glucosidases finalize the process by hydrolyzing cellobiose into glucose, so the efficiency of cellulose hydrolysis is largely dependent on the quantity and quality of these enzymes used during saccharification. Dr. Tuan-Hua David Ho and his research team have discovered the fungal b-glucosidase D2-BGL from a Taiwanese indigenous fungus Chaetomella raphigera. (Kao et al. 2019 Biotechnology for Biofuels). Recombinant D2-BGL expressed in yeast displayed significantly higher substrate affinity than the commercial b-glucosidase Novozyme 188 (N188). Compared to N188, use of D2-BGL halved the time necessary to produce maximal levels of ethanol by a semi-simultaneous saccharification and fermentation process.  When combined with Trichoderma reesei cellulases, it hydrolyzed acid-pretreated lignocellulosic biomasses more efficiently than the commercial cellulase mixture CTec3. Crystal structure analysis revealed that D2-BGL belongs to glycoside hydrolase (GH) family 3. The F256 substrate-binding residue in D2-BGL is located in a shorter loop surrounding the active site pocket relative to that of Aspergillus b-glucosidases, and this short loop is responsible for its high substrate affinity toward cellobiose. 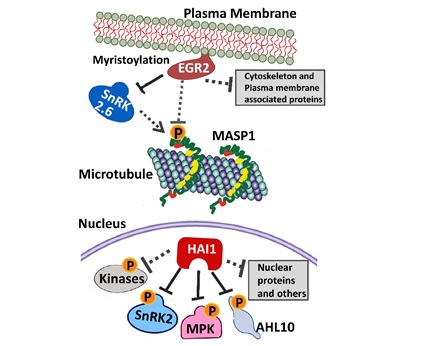 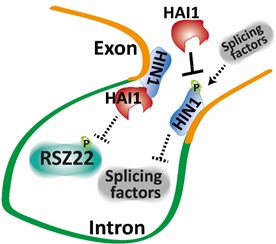 The ability of plants to acclimate and maintain productivity under changing environmental conditions is important because of climate change and increasing demands on agriculture. Plant acclimation to abiotic stresses such as drought involves multiple layers of gene regulation and post-translational protein modifications. Pre-mRNA splicing, particularly intron retention (IR), is altered by stress yet little is known about how stress signaling impinges upon the splicing machinery to cause such changes. In previous research, the Verslues laboratory noted that the protein phosphatase Highly ABA-Induced 1 (HAI1) has especially prominent effects on drought phenotypes such as growth and proline accumulation.  A screen for HAI1 interacting proteins identified a protein of unknown function, HAI1 Interacting Protein 1 (HIN1) (Chong et al., 2019 PNAS).  HIN1 is a new type of plant-specific RNA-binding protein that affects splicing efficiency of IR-prone introns.  HIN1 is involved in enhanced splicing efficiency of IR-prone introns that occurs during drought acclimation and interacts with several splicing regulators.  HIN1 can be dephosphorylated by HAI1 and may also recruit HAI1 to dephosphorylate other splicing regulators.  This later hypothesis is consistent with our previous phosphoproteomics analysis (Wong et al., 2019 PNAS) which identified splicing factors and RNA binding proteins as putative targets of HAI1-regulated dephosphorylation. Together these data show that HAI1-HIN1 regulation is a new mechanism connecting stress signaling to pre-mRNA splicing.