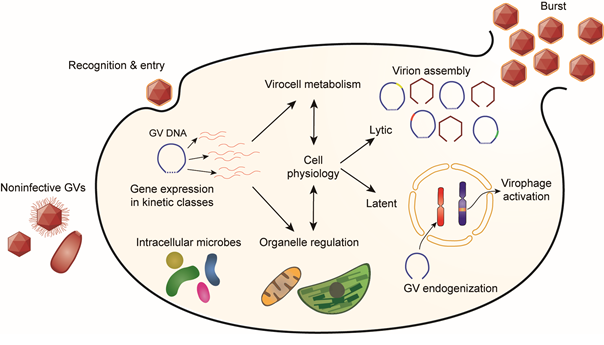 Fig. Schematic overview of known and putative interactions between giant viruses and eukaryotes.

Giant DNA viruses of eukaryotes are notable for their extraordinary particle size, genome size, and coding capacity. Once thought to be oddities in the virus world, they have turned out to be widely occurring in marine, freshwater, and terrestrial ecosystems and are commonly associated with diverse hosts, including animals and microbial eukaryotes such as microalgae and heterotrophic protists. However, their ecological distribution, dynamics, and functions, as well as their roles in the evolution of eukaryotes, are still poorly known. This commentary discusses how new sequencing techniques and information can inform us about the interactions between giant viruses and eukaryotic hosts during the viral replication cycle and their implications for ecological and evolutionary processes across different spatiotemporal scales. It highlights the use of environmental sampling, comparative genomics, single-particle omics, and other systems microbiological approaches to better understand these elusive microbes.