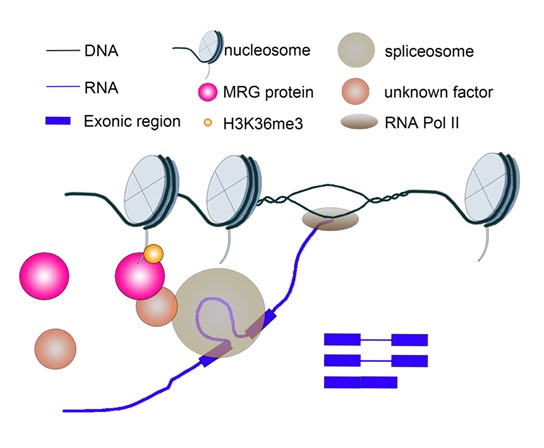 Plants perceive dynamic light conditions and optimize their growth and development accordingly by regulating gene expression at multiple levels. Alternative splicing (AS), a widespread mechanism in eukaryotes that post-transcriptionally generates two or more messenger RNAs (mRNAs) from the same pre-mRNA, is rapidly controlled by light. However, a detailed mechanism of light-regulated AS is still not clear. Dr. Tu and his research group demonstrate that chromatin modification is responsive to light at specific gene loci which encode transcripts with light-regulated AS in the moss Physcomitrella patens. A chromatin adaptor, named PpMRG1, binds to these gene loci in response to light and involves in regulation of AS and phototropism. Their results suggest that light regulates chromatin modification, which leads to alterations of AS patterns. The chromatin adaptor PpMRG1 potentially participates in light-mediated AS, revealing that chromatin-coupled regulation of pre-mRNA splicing is an important aspect of the plant’s response to environmental changes.