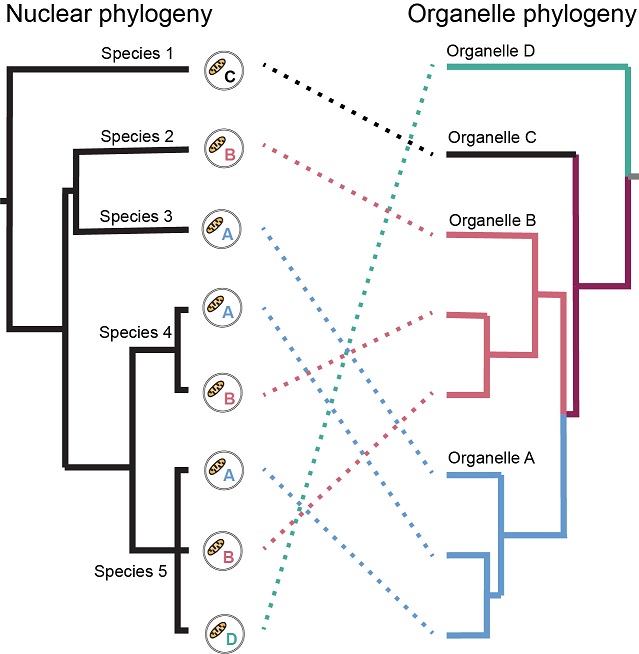 Mitochondria and plastids are crucial organelles in eukaryotes. Because of their endosymbiotic origins from bacteria, they have their own DNA genomes that replicate outside the nucleus. In most animals and plants, organellar genomes are generally transmitted maternally. However, their modes of inheritance remain largely unknown for unicellular organisms, which comprise the vast majority of eukaryotic lineages, including diverse groups of microalgae. In this study, the research team of Chuan Ku at the Institute of Plant and Microbial Biology, Academia Sinica, investigated the evolutionary history of mitochondrial, plastid, and nuclear genomes in coccolithophores, calcifying microalgae that are commonly found across global oceans. In the nuclear genome phylogeny, the most abundant species, Emiliania huxleyi, and several closely related species are separated into clades with distinct morphology or distribution patterns. However, such relationships are absent in the mitochondrial and plastid phylogenies, which group strains from different species into the same clades and show branching patterns highly incongruent with those in the nuclear phylogeny. Furthermore, the two organellar phylogenies differ substantially from each other, which has not been observed in previous studies on plants.

This rampant phylogenomic discordance is due to a combination of evolutionary processes, including organellar genome recombination, incomplete lineage sorting of ancient polymorphic organellar genomes, and higher rates of organellar than nuclear introgression, including the extreme case of organellar captures (i.e., replacements of whole organellar genomes). In addition, the genomes of the two organelles are not inherited as a single cytoplasmic unit. Some possible reasons can account for the extent of inter-genomic discordance in coccolithophores, including biparental inheritance of organellar DNA, isogamy (i.e., mating between gametes of similar size and morphology), and haplodiplontic life cycle (alternation between free-living haploid and diploid phases). Similar to occasional androgenesis and gynogenesis in animals and plants (inheritance of only male or female nuclear genome), a putative mode of reproduction called ‘unigenesis’ was proposed for coccolithophores, with the nuclear genome uniparentally inherited, to explain the higher rates of organellar introgression. In summary, this study sheds light on the convoluted evolution and inheritance of organellar genomes in these important algae and provides a window into the phylogenomic complexity of marine unicellular eukaryotes.

The team of this work includes the first author Tzu-Tong Kao, a recipient of Academia Sinica postdoctoral fellowship, and Tzu-Haw Wang, a research associate. The work was supported by Ministry of Science and Technology (108-2311-B-001-040-MY3) and Academia Sinica Career Development Award (AS-CDA-110-L01).