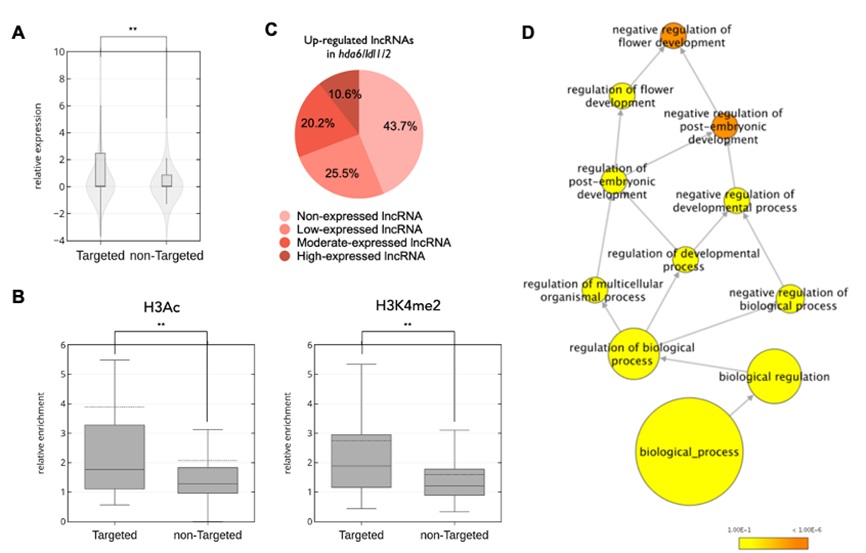 A. Violin plots with boxplots showing the relative expression on the HDA6/LDL1 co-targeted and non-targeted lncRNAs in hda6/ldl1/2 compared to those in WT

B. Boxplots showing the relative enrichment of H3Ac and H3K4me2 on the HDA6/LDL1 co-targeted and non-targeted lncRNAs in hda6/ldl1/2 compared to those in WT.

C. A Pie chart showing the distribution of non-expressed, low-expressed, moderate-expressed and high-expressed lncRNAs in the lncRNAs upregulated in hda6/ldl1/2

D. GO analysis of HDA6-LDL1/2 regulated lnRNAs which are associated with flower development

In recent years, eukaryotic long noncoding RNAs (lncRNAs) have been identified as important factors involved in a wide variety of biological processes, including histone modification, alternative splicing and transcription enhancement. The expression of lncRNAs is highly tissue-specific and is regulated by environmental stresses. Recently, a large number of lncRNAs have been identified in plants, but very few of them have been studied in detail. Furthermore, the mechanism of lncRNA expression regulation remains largely unknown. Arabidopsis HISTONE DEACETYLASE 6 (HDA6) and LSD1-LIKE 1/2 (LDL1/2) can repress gene expression synergistically by regulating H3Ac/H3K4me. In this research, we performed RNA-seq and ChIP-seq analyses to further clarify the function of HDA6-LDL1/2. Our results indicated that the global expression of lncRNAs is increased in hda6/ldl1/2, and this increased lncRNA expression is particularly associated with H3Ac and H3K4me changes. In addition, we found that HDA6-LDL1/2 is important to repress the non-expressed and low-expressed lncRNAs, which may be strongly associated with plant development. The GO-enrichment analysis also revealed that the neighboring genes of the lncRNAs upregulated in hda6/ldl1/2 are associated with various developmental processes. Collectively, our results revealed that the expression of lncRNAs is associated with H3Ac/H3K4me2 changes regulated by HDA6-LDL1/2 histone modification complex.

Hung et al (2020) The expression of long noncoding RNAs is associated with H3Ac and H3K4me2 changes regulated by the HDA6-LDL1/2 histone modification complex in Arabidopsis. NAR Genomics and Bioinformatics