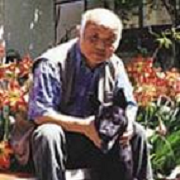 The long term-goal of our group aims to explore novel morphogenesis in culture system of a variety of higher plants, and try to understand the control process of these morphogenesis. We continue to study the morphogenesis in ginseng (Panax ginseng) tissue culture. Plantlets derived from embryoids flowered precociously and set miniature fruits. Cultures of these in vitro formed miniature fruits on a defined medium produced mass of fruit-like structures without callus proliferation. These fruit-like structures turned red as culture aged. Miniature flowers protruded from these proliferated fruit masses. Causal factors on these fruit proliferation and in vitro flowering are being studied. Prolonged culturing of embryoids derived protoplasts proliferated to form callus and produced embryoids. In vitro precocious flowering and fruiting of these protoplast-derived plantlets were also achieved in defined condition. These morphogenesis systems are being used to explore the control process on reducing juvenility, precocious flowering, and fruiting in vitro.

We have included bamboo as second plant group for our studies on plant juvenility and precocious flowering. Plant regeneration through somatic embryogenese from tissues of inflorescence and vegetative organs have been achieved in three bamboo species. Precocious flowering of somatic embryos and regenerated plantlets have been demonstrated. Large numbers of flowers proliferated from cultured flowers. A novel spiklet proliferation (spliklet-produced spikletes) process was demonstrated in the bamboo flower culture. We are interested in studying the control process of these reducing juvenility process, and also attempt to introduce foreign disease resistance genes to the regenerated bamboo through transformation.

In vitro morphogenesis and efficient micropagation protocols of several terrestrial orchids have been studied. These orchids are usually derived from dividing potted plants or seeds. Propagation of this genus, either by seed or by in vitro culture, is still considered difficult. We obtained three kinds of morphogenesis from callus cultures of Cymbidium ensifolium var misericors: rhizomes, shoot buds and granular embryoids. Healthy plantlets were obtained following regeneration via callus-derived rhizomes and granular embryoid-like structures. Similar morphogenesis was also found in Paphiopedilum, Oncidium, and Phalaenopsis. Practical protocols for mass propagation of these orchids have been developed. Mass spsupension cultures of these orchids and plant regeneration from these cells are currently attempted.